Early Autumn in the Cascade Mountains

Back in September, I spent a few days in the north Cascade Mountains.  While I live in a province of mountains, I had never been to this region before.  Fall comes early in the mountains, and the leaves of the aspens had already turned yellow and were starting to fall.  Nights and mornings were chilly, and the remnants of snow in the mountains above were a reminder of the winter soon to come.  We had arrived too late to see the alpine wildflowers, but we were just in time for the gorgeous autumn colours on the high-elevation slopes.  I don’t think I’ve ever seen anything quite like this before: 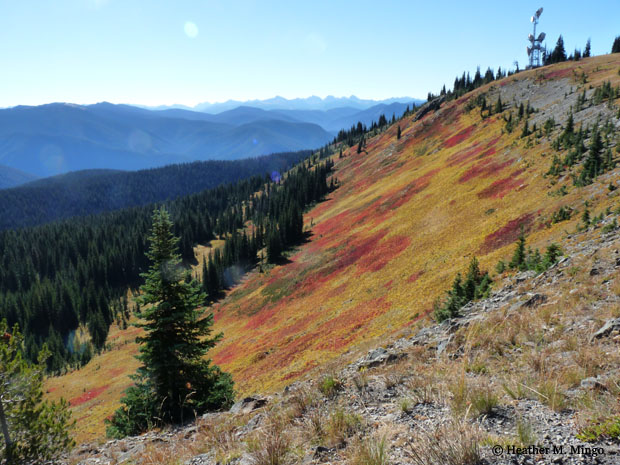 The Cascade Mountains run from southern British Columbia through Washington and Oregon, and into northern California.  Here in BC, the Cascades mark a transition from the coastal rainforests to the dry interior forests and grasslands.  And throughout their range, they contain a number of volcanoes, including Washington’s Mt. St. Helens, which erupted in 1980, scattering ashes as far north as my family’s home in BC.

As I looked south through the mountains, I could see many more peaks rising, one after the other, into the distance.  Most of the mountains I could see were in fact in the United States.  It’s an odd feeling to look across and to think, “That’s another country,” because of course their mountains look just like our mountains, serving as a reminder of just how artificial human boundaries truly are. 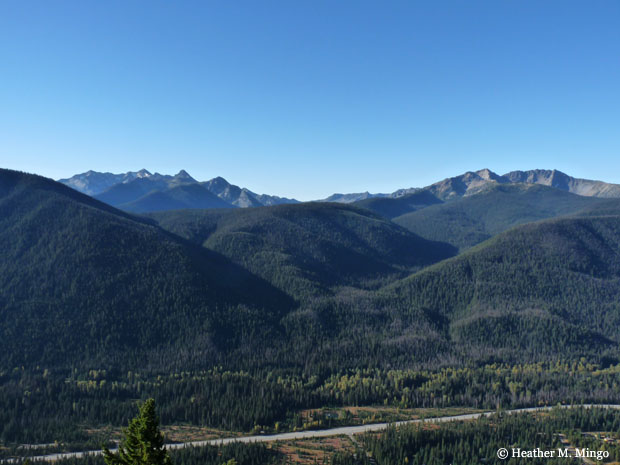 Some people call this region simply “Cascadia”, recognizing that human culture (just like the more-than-human ecology) is shaped by the landscape and environment, not just by where the political boundaries happen to be located.  Many of my favourite authors and bloggers just happen to be from this region, so I think there may be something to this, some underlying theme that draws me to them, even when they’re writing about very different topics.

A portion of the Canadian Cascades fall within Manning Provincial Park.  Like many provincial and national parks around here, this park can become very busy with tourists and visitors in the summer months.  Ironically, this can mean that the very natural beauty the parks are meant to preserve can be hard to appreciate for the crowds.  But in September, things were quieter.

For hikers, the park offers many trails that trek high into the mountains.  One day, perhaps, I will return and explore some of these trails further.  But even on the shorter trails that we walked on, we discovered many things, from strange-looking fungi to a Whitebark Pine (an important tree of high elevations, whose seeds are the main food source of Clark’s Nutcrackers) to ponds created by decades-old beaver dams and even a few butterflies, lingering on for the last few warm days of the years.  For soon the mountains will be covered with snow, and my travels also will be done until next spring.

3 Responses to Early Autumn in the Cascade Mountains